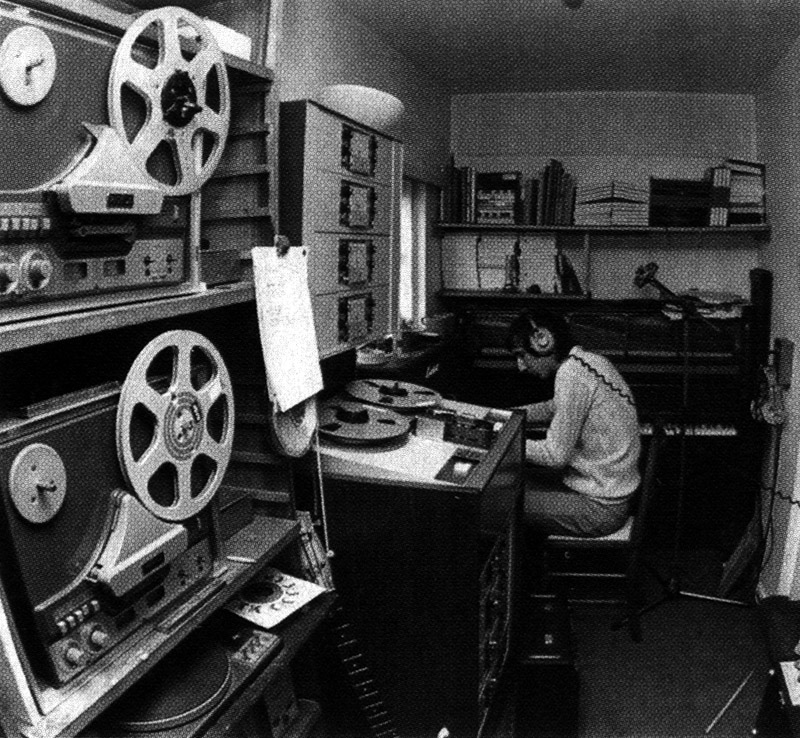 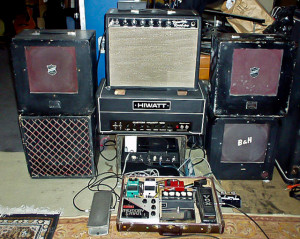 My frighteningly awesome sounding amp rig circa 2000-2. There have been many such combinations, but this one, taking elements of both Neil Young & Ry Cooder stage set ups, was one of the best. Certainly the most…robust.

1965 Princeton Reverb. The heart of it all and remains my favorite amp ever. Onstage it gets mic’d for house and has a custom made instrument level tap that comes off the speaker and travels->

1971 Hiwatt 100. Unbelievable headroom (this one rated 120 watts clean, 170 full up) and responsible for whatever stage volume needed. It fed either 2 or 4 Bell & Howell 1×12 movie cabs, often set at an angle or backwards depending on the room.

…and they gave me a little nod. It was inspiring to play a packed house at SF’s Great American Music Hall – a really great show as the live CD confirms.

Musically, Rut has never had a better band than he did on this night, and highlights abound. Danny Allen’s echo-drenched slide solo on “Monkey Boy” oozes and crackles like a brick of firecrackers stuck in molasses, and Lucio Menegon’s reverby Telecaster excursion on the touching “Hole in Space” perfectly carves that hole before the band slams back into the almost Pink Floydian bridge, “I like now/now is enough/now is the only time we have to love.”

Check this nice show review of a set performed with Rob Wallace in Bowling Green, OH this past February. The set was part of a film/music series Rob co-hosts called, Other Musics: Four Free Films on Free Sounds, the focus of the write-up, but receives some considerable attention:

Lucio used his entire instrument in service of his art, pounding the body, sliding a magnet along the frets, even pouring lighter fluid on the neck (which I will admit made me wonder if we were in for a Jimi Hendrix moment), to achieve the just-right tone he was going for. Wallace used his whole body as well, kneeling in front of his smorgasbord of sound, sometimes using both hands and his mouth, each on separate instruments, to accompany Lucio’s play. Any attempt I might make to capture the tonal qualities of this musical performance will surely fail. Suffice to say, I was transfixed, smiling like a loon at the sheer whimsy of it all. This music is “play” in its purest form. Both musicians are professionals and well-trained (Wallace is steeped in musicology and quite a good tabla player), and they certainly needed that foundation to build their tree-fort of sonic fun upon.

tree-fort of sonic fun is my favorite new description. Totally awesome. This is why small town such gigs are worthwhile – you just never know. It is also perhaps the reason Jack Wright likes to play them.