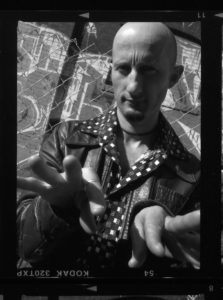 Lucio Menegon is a guitarist, composer, improvisor and sonic artist. His work encompasses avant rock, ambient soundscape, melodic pop and free improvisation. A unifying theory of this mess has proven illusive and his many projects, recording credits and performances throughout North America and Europe are an ongoing effort to reconcile extremes and dispense with genre.

Lucio’s film soundtrack compositions have appeared in concert, films and festivals as diverse as The Joshua Treenial to MOFOM Prague to Sundance. His ambient and sound art improvisations range from contemplative to corrosive and have appeared at festivals from Stazione di Topolo, Italy to Sonic Circuits, DC to Sound Emissions in Beijing China. He has collaborated and performed with a broad range of artists. A somewhat up to date, potentially exhaustive, greatest hits list of credits can be found here. He counts the SF Bay Area’s The Bodice Rippers, Zebu, Ramona The Pest and The Ho! as past bands of note.