Depends…Often when you’re under the microscope of the studio you can rarely judge accurately if you’ve given it your best. You can rarely be objective enough to know what you put down is actually what you are after. A good producer can offer that. However, if you are really focused you can do it yourself. Take for example, one of my favorite artists, Billy Childish, who loathes the idea of a producer yet has managed to put out over 100 cool records. Then again, Billy Childish is one focused fella when it comes to his art.

Some of my favorite producers – Roger Moutenot, Chris Thomas, Tucker Martine, understand that the gig is just as much about people and psychology as it is music. They become an integral part of the formula and work very transparently. Consequently, they often don’t get credit where it is due (what did he actually do?!). No matter – let’s look at what can happen without one.

Case A: The artist knows what he/she is doing, has the studio and all the musicians in order, songs together, band rehearsed, nails the performance, pays attention during the mix and leaves with an amazing record. Now this takes a lot of work, a lot of mistakes and a lot of experience to do. Nothing like finding that out in a studio! Do you need that kind of stress? Maybe. If you have done 10 years of 4 tracking and are able to produce in your own environment – then consider making a record that way, because that will all change the moment you walk into another studio. Your experience will need breadth as well as depth. Frequency – rare.

Case B: The engineer or someone playing on the session ends up producing by default. Usually this person will develop a migraine from the multi-tasking, won’t have much fun and will probably feel underpaid. This will affect the session. What? The engineer/producer erased a track? The mix isn’t what you wanted? The guitarist hates what he played? Frequency – often.

So, if you are not afraid of a new relationship and are willing to put an effort into finding a good producer, it can pay off. You are going to have to put a lot of trust in the person producing, trust that he/she is of like mind about your project and that you’re both going for what you ultimately want to hear.

Production Tip #1 – Work on your songs and arrangements before you step into a studio. Work is the key word. Takes up time. Makes better records. Great SONGS and compositions are the most key ingredient in making make great records.

This the history and evolution of Kingtone Studio recording set-ups. The idea was lifted from the liner notes to the Pete Townshend “Scoop” LPs.

Studio #7 2008-present. 8-24 tracks. I’ve been obsessed with keeping the smallest footprint possible. I wanted something both portable yet totally pro to track with, making do with what I already have excepting a few necessary upgrades. There are so many options available but it boils down to two or three paths. My Metric Halo 2882 firewire AD/DA interface (which I owned/used briefly in 2003 before they developed the crucial 2D mixer option) is still running strong into a MacBook pro running a combination of Harrison MixBus 32C (for mixing and some editing), Waves Tracks (for live tracking) and Reaper (for editing and manipulating). I used to use Digital Performer and long ago left Protools in the dust. This setup gives plenty of ultra high quality ins and outs. The 2882 and a UA 2-610 tube mic preamp has enabled me to get great recordings and keeps my table top nice and clean. I always have a pair of ADAM A7s and a few other speakers for reference (including my trusty Cambridge Audio computer speakers) but do miss a mixing board for hands on control…someday soon. I recently scored a great Otari MX-55 1/4″ open reel deck…ah analog, how I sometimes miss you.

Studio #6 2007. The PARIS system’s main card died – RIP. Faced with the prospect purchasing another card with a limited life span and continuing to run OS9, I chose to sell the PARIS parts off. I started using a simple Protools setup with a $200 MBox. 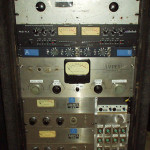 Studio #5 2004 to 2006 – Emeryville, CA. 16 tracks+. I moved to a more spacious and brighter studio and fully committed to the digital age when I discovered and purchased a ‘vintage’ DAW platform, PARIS. Fantastic sounding, stable, with really intuitive (ie analog) recording, mixing and editing capabilities. 16 tracks, 24 bit, no latency with real time fx, eq and aux capability AND a solid, workable control surface. Basically a Protools HD with better sound at a fraction of the price. And since it had its own processing power, I ran it for years with my old Mac 7600 with no problems. I added a sweet Ampex 350 mic preamp (rebuilt by Rance) and a FMR audio Really Nice Preamp to the setup which was now neatly contained in two roll around racks.

Studio #4 2003 – Emeryville, CA. 8track. I struggled for a year with a free version of Protools 4.0 and an old Digidesign Audio Media III card (16 bit, 2 i/o) running on a really old Mac 7600 (G3) in a dark and dank rehearsal studio. The setup was hodgepodge and without a proper patchbay, but it sounded okay. I recorded a lot of cool music – much of it for the Immersion Composition Society. 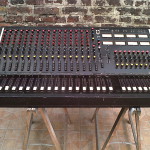 Studio #3 1998-2002 Berkeley, CA. 8+ tracks. I moved into a warehouse complex right on the train tracks in West Berkeley and made the move to mostly vintage pro gear with the help of my good friend and SF bay area audio guru, Lawrence Fellow-Mannion. The centerpiece was a beautiful 1969 3M M23 1″ 8 track that I found sitting in a forgotten corner of El Cerrito Guitar Center, a late 70’s Soundcraft Series II 16/8/2 desk from Wallysound, a couple of Dan Alexander Neve 1272 and Ampex 601 mic pre’s, some good compressors, an Otari MX 5050bIIb 1/4″ deck and a tt patchbay with fancy quad cabling. I added an amazing Lawson L47 tube mic and a Coles 4038 ribbon to the collection. My friend Ricardo Esway, chipped in some digital gear including 8 channels of MOTU digital in/out (that paled in comparison to sound of the M23).

The tracking room had great sound and fantastic reverb decay due to the 30′ arched wood ceiling. We built a proper double-walled control room but left the rest of the space as is (ie not remotely soundproof). Amazingly the trains that frequently roared by rarely interfered with recording. I eventually moved out of the space and broke up the studio (no more tinkering and soldering!). The M23, Soundcraft and patchpay live with Chris Butler and his vintage collection in Hoboken, NJ, but I did keep some crucial gear… 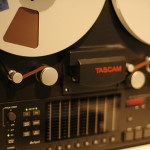 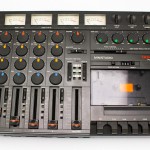 Studio #1 1985-1989 Various east coast USA locales. 4 track. Purchased the venerable Tascam Porta-One cassette ministudio and a couple of Shure 57’s from Manny’s in NYC. What a great combo. Ease of use, durability, cool VU meters, it was just such a home run by Tascam. Recorded A LOT of demos, ideas and several cassette releases. Before this the only machines available were huge. In fact, the only recording experience before this (the thing that started it all, really) was a month long internship with the huge, dodgy Ampex 4-track open reel studio in my university music department.